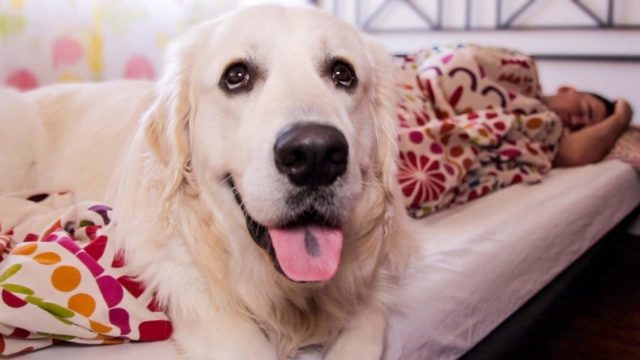 Doesn’t everyone hate alarm clocks? They’re definitely annoying, but necessary evils. Now what if you had a different type of alarm clock? Something that you won’t hate waking up to. We’re talking about none other than your number one fan, your beloved pooch.

Meet Bailey the golden retriever. He’s kinda a big deal on the Internet. Let’s watch a video of him waking up his owner, and let’s see how his owner reacts.

At the start of the video, we see Bailey in a good mood. He’s ready to wake his owner up. His tail looks good and is upright. He glances in different directions for a while before looking at the bed. Bailey waits for a few seconds. He’s clearly contemplating something.

Then Bailey jumps on the bed, but not directly on the person yet. He circles around avoiding contact with his owner first. It looks like he is enjoying the bounciness of the bed. Bailey lays down and waits.

When he notices his owner move, he quickly pounces on him to wake him up. Bailey starts licking his owner’s face, and his owner wakes up. Laughter ensues, and the owner calls Bailey with a smile. When his owner tries to get back to sleep, Bailey goes into relentless overdrive.

The golden retriever gets on top of his owner and doesn’t stop until he completely wakes up. We can see how excited Bailey is to start the day with his owner. We all deserve an alarm clock as dedicated and loving as Bailey.

His owner gets ticklish as Bailey doesn’t stop. The dog continues to lick his owner’s face. Bailey is determined. He will do everything he can just to wake his owner up.

Baily has his own Youtube channel called Funny Dog Bailey. He has over 198k subscribers and his owner uploads regularly. Check him out.