Home All Articles Dog Fight: What Do You Do? 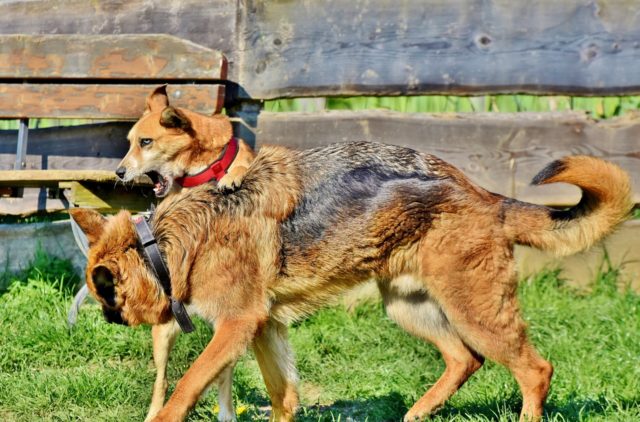 Dogs fight. They do. And it’s normal that they do. However, as a dog owner, you can feel your heart pumping and get anxious and worried about your pet when they get involved in a fight. After all, you wouldn’t want your pet to be harmed in any way.

Experts say that most dogs get into scuffles, and that’s all it is. A scuffle. They make a lot of noise but you won’t notice a lot of physicality. This means that you generally don’t have to worry about your dog getting harmed.

However, you should keep a close eye on how the interaction unfolds. A scuffle might lead to a big fight and you should know the right time to intervene.

Knowing The Right Time To Butt In

Knowing when to intervene in a dog fight is related to the length of the interaction. If it ends quickly, you don’t need to worry yourself. This is according to Renee Payne. Payne works as a behavior specialist for canines in New York City.

Aside from this, Payne also shares that you should be aware of the behavior of the dogs that are in the fight. Once you see that either dog is in trouble you should intervene. You don’t want the fight to go too far.

Do Not Grab Your Dog’s Hind Legs

The old school advice for dog owners is to grab your dog’s hind legs when the fight begins. This is supposed to keep your dog away and stop the fight before it gets too serious. However, Payne points out that this could be dangerous for you and for your dog. This is because your pet can pull out of your grasp and re-enter the fight more aggressively, and you could also become a victim in the scuffle.

What You Can Do Instead

According to experts, what you can do instead is to be loud. Start yelling and clapping really loudly. If that doesn’t work, find something to throw between the two fighting dogs. The goal is to not hurt the dogs, but to devise an interruption that stops the fight before it gets out of hand. Some try to get water and throw it between the dogs which usually stops the fight with no dog (or dog owners) getting harmed.