Home All Articles Watch The Rescue Of A Dogfighting Bait Dog That Turned Out To... 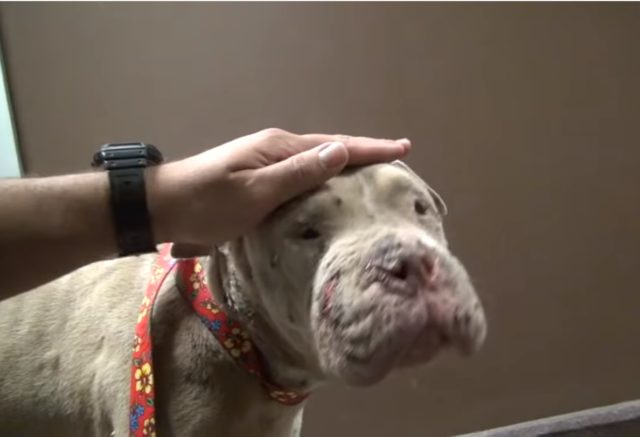 Hope for Paws is an animal group that gives abandoned and neglected animals a chance to live healthy, happy lives. They are made up of staff and volunteers all dedicated to the group’s mission. Ever since they were founded, Hope for Paws has saved hundreds, if not thousands, of animals from the streets and abusive homes and placed them in their new forever homes.

The organization grew after their rescue stories were recorded through a video and uploaded on their YouTube Channel. Hope for Paws was able to gather a lot of supporters all over the world due to their sad-turned-happy rescue stories.

In case you don’t know, a bait dog is used to test the fighting instinct of other dogs. They serve as “bait” for the other dogs, similar to how worms serve as bait when fishing. It’s brutal.

The Rescue Of Cadence The Bait Dog

Among the many dogs Hope for Paws has rescued was a pit bull that was used as a bait dog for the illegal and bloody sport of dogfighting.

The injured pit bull was abandoned on the streets by her owners after realizing she no longer served them a purpose. In the video below you can see all the wounds on her face. The rescuers named her Cadence, and you should see her transformation now.

What an incredible rescue story. You can see that before Cadence was rescued, she was suffering from wounds on her face and all over her body. Her eyes were also injured.

Cadence is a pit bull, but she defies all the misconceptions of her breed. She’s very kind and calm. She didn’t even growl, much less bark when one of the rescuers placed a leash on her.  She went with them gently and hopped into the car just with gentle coaxing.

She was immediately taken to a vet, and they took care of her wounds. During their stay at the clinic, Cadence was very kind and gentle.

Rescue stories always make me realized that all dogs deserve a second chance. Just like Cadence, she may have had a bad start in life, but she ended being adopted in a loving family to take care of her and give her the life she deserves.